Solo exhibiton “Who knows where the time goes…?”

Rachael Polson completed her Bachelor of Visual Arts with Honours from Adelaide Central School of Art in 2009. At the beginning of 2010, after nine years in Adelaide she and her family have moved to Timaru, New Zealand.  From this busy time in her life, comes work motivated by the desire to stand still, to freeze time, to capture moments, to know where time goes.

Rachael’s works are a collection of sculptures, paintings and photographs.  She explores brushstrokes captured in paint. The camera has also been used as a painting tool.  By sweeping the camera across her own paintings she has ‘painted’ new works with the camera. Subsequent works are developed though a process of ‘cross pollination’ between media. Each work informs the next; consciously pollinating from paint to thread to camera image. 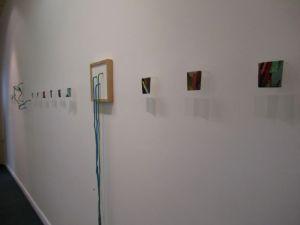 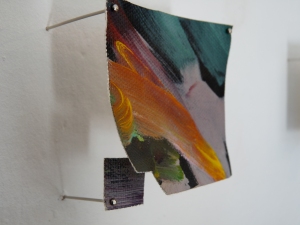 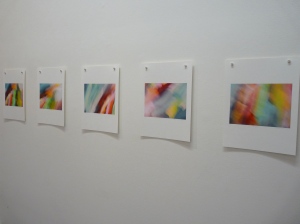 For more images of this exhibition, please click on page tab above “Gallery Images” 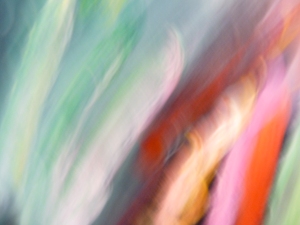 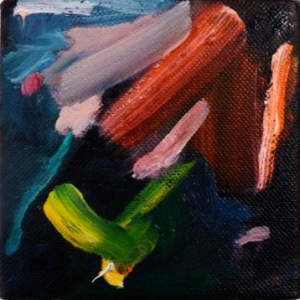 Drawing or Painting with the camera and “cross pollination”

Here are some of my latest photos.  These are photos of my paintings.  I am “cross pollinating” between media. My work extends this idea of cross pollination to include interaction between of works 2 dimensions and 3 dimensions. In this case I am taking another step in the interaction between materials by using the camera as a drawing tool.  It is a tool for the capture of something fleeting, something which I have noticed and feel is deserving of longer contemplation.

Anne Ellegood uses the term ‘cross pollination’ in reference to Rosalind Krauss’ observation of wide ranging use of media and experimentation within and around the traditional definition of sculpture. Rather than artistic works being limited to one material, the definition of sculpture has expanded to include a wide variety of works. (P. 8 Introduction Motley Efforts: Sculpture’s Ever-Expanding Field, Vitamin 3-d: New Perspectives in Sculpture and Installation, Phaidon Press, 2009) 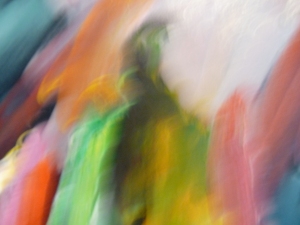 © Rachael J Polson and http://www.rachaelpolsonartist, 2010. Unauthorized use and/or duplication of this material without express and written permission from this blog’s author and/or owner is strictly prohibited. Excerpts and links may be used, provided that full and clear credit is given to Rachael J Polson and http://www.rachaelpolsonartist.wordpress.com with appropriate and specific direction to the original content.

Painting in the expanded field

Does a painting have to happen on a canvas?  In line with Rosalind Krauss’ writings on Sculpture in the Expanded Field and subsequent writings by Gustavo Fares on Painting in the Expanded Field,  these sculptures can be regarded as ‘paintings’.     Pigment (in the form of thread)  is mixed together as paint would be. Each box is like a tiny precious moment held in time.

Can we trap time in a material?

This work became known as  “frozen calligraphy ” around art school, due to the trapped gestural movement inherent in the work.  Each form is wrapped in bright thread.  This is an attempt to trap time in the material by the repeated action of wrapping. 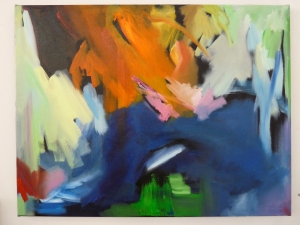 Can a moment in time be captured in paint?  Paint is a particularly good medium for recording movement.  Each brushmark traps the movement made by the artist, preserving that moment on the canvas.

This work is primarily formally based.  Emphasis is on tonal variation, line and repetition.  But we can also ‘read’ the repeated action of unravelling the string and hanging it up.  Again those actions and moments are ‘trapped’ and held within the work.

This is from my 3rd year studio work at Art School. I was experimenting with abstracting the human form in relation to movement and mark making as a way of trapping a gesture.

Interaction between 2 dimensions and 3

This painting/sculpture explores the interaction between 2 dimensions and 3 dimensions.  Coloured wrappings on the sculpture cause the viewers eye to move back and forward across both dimensions.  The aim is to interfere with the way the viewer regards the work resulting in an alternating sense of movement and stillness.

© Rachael Jean Polson and http://www.rachaelpolsonartist.wordpress.com, 2010. Unauthorized use and/or duplication of this material without express and written permission from this blog’s author and/or owner is strictly prohibited. Excerpts and links may be used, provided that full and clear credit is given to Rachael Jean Polson and http://www.rachaelpolsonartist.wordpress.com  with appropriate and specific direction to the original content.

Welcome to my blogsite.  Please do scroll through to see all entries. Click on the images to enlarge them for a better look!